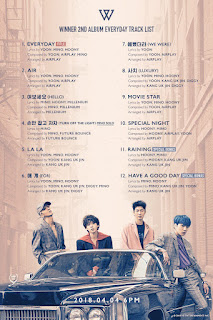 WINNER 2nd Album `EVERYD4Y` Full Tracklist – Here they are comes with full track of the `EVERYD4Y` album guys. They come with 12th tracks including special released tracks `Raining` and `Have A Good Day`.

Some articles gives us a hint of meaning behind the tracks:

“WE WERE” is mentioned to be a sophisticated Rock Ballad “Luxury” amplifies the feeling of wanting to noticed by their beloved. “MOVIE STAR” is a specially written song for their fans INNER CIRCLE.Meanwhile “SPECIAL NIGHT” is the first song Hoony has produced. (Source : http://entertain.naver.com/read?oid=076&aid=0003233573, trans by : @winkonusa)