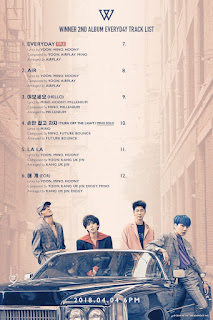 There are 12 tracks on WINNER 2nd comeback album, but in D-8 they showed 6 tracks. The tittle of the tracks are Everyday, Air, Hello, Turn Off The Light, La La, and For. One of the track is Mino`s solo song.

"The sophisticated and cheerful trap song, 'EVERYDAY', is minimalistic and has distinct characteristics that combines public friendliness with musicality. The lyrics are about being happy every day with people they love."https://t.co/T9CEG9Hu0T pic.twitter.com/0NikoDE4kU

#6 "For" 애 걔 – When there is no space btwn the two characters, it's an exclamation u say when something u thought would be big turns out to be tiny (a tone of making fun) Since theres a space, it can be read as "kid, him" or "kid, her". (I expect there's a word play with this)