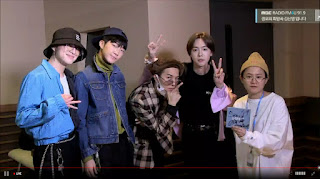 
If they want it, they get it, from Boni Hani to Animal Farm to a morning new show, we’re with WINNER today

DJ: Apparently, before we asked u to guest here, u guys wanted to come here first
SY: Bc all the wishes we made here last year became true, which is important for us

DJ: U wanted Animal Farm and u got it
Y: Hoon wanted to go on that show the most
H: I loved how our pets looked so pretty/handsome instead of us
DJ: U didnt look pretty?
Y: I looked rly natural and tired. They only filmed our pets prettily
M: I looked so bad

DJ: U were on Morning Wide news show this morning!
Y: Hoon rly works hard to go on shows that idols usually dont go on. He mentioned Morning Wide during our cb interviews and we got it. Anything Hoon says comes true
DJ: Lets talk abt all the shows u want to go on today

DJ: What abt national singing contest?
Y: That sounds so good
DJ: The only problem is thers a 6-month long waitlist
W: Oh..

DJ naming shows each member should go on

M: (about going on LotJ) Im so scared of bugs though. If the bug is bigger than my fingertip, I’m scared of it
H: Theres not as many bugs as u would expect

Theres a person called Lee Seungyoon on “I am a Natural Person” so if Yoon goes, there’ll be double Seungyoons

DJ: Now that we named all these shows, if any of you get offers from any of these shows, we’re going to say its my radio show’s impact

About EVERYDAY
Y: at first, we thought it was so-so but the more we listened to it, the better it sounded so it ended up being the title
DJ: it stays in my head all day long!
Y: we want to work hard everyday

DJ: I listened to TURN OFF THE LIGHT first before the title bc the name was so impactful (let’s hold hands and sleep)
J: I rly love MOVIE STAR bc of its lyrics

H: I like WE WERE bc we were going to release it some time ago but we couldnt and it finally got released

Mino talking abt LotJ: I will go if the place doesnt have any bugs

Yoon talked about SPECIAL NIGHT: I like it bc Hoon is the main part of the song

Q. which sunbae took care of u the most in WPL?
Y: Haesoo-hyung

Q. who is Haute most awkward with
H: Mino

Q. Which hyung is most child-like in WON
J: Kijoon-hyung

Q. drama genre u want to do?
Y: Medical

Q. how did u think of Yoon when he had his american illness
H: so annoying

Q. what was the most uncomfortable thing abt rooming with Kang Hodong
M: everything

Q. what song do u get requested the most for weddings?
Y: instinctively

Q. did the pizza u bought for fans more expensive than u expected?
H: no, cheaper than expected

Q. who is the least dumb in W in your opinion
M: hoon

Y: I want to act in a medical drama just for the experience, even if i don’t do well acting-wise, i want to challenge myself in saying all those medical jargon
DJ: MBC makes a medical drama every few yrs so it’s possible u might get casted
Y: can i be hopeful then?

H: In LA, we were interviewing with an American interviewer and Yoon acted like he knew what the interviewer said so he talked in English before he finished asking the question. it was embarrassing
Y: we were so tired and waiting for the interpreter takes time so I did that

Q. food u couldnt give up during your diet?
M: ddeokbbokki

M: I gave up drinking completely but I couldnt give up ddeokbbokki

DJ: W is like Song Kangho of the music industry. Youre so talented in music. Thats y u can make+perform any kind of music. ur talent lies deep like Song Kangho’s talent in acting. (Song Kangho is a rly famous actor who does a wide range of films. All his movies are successful)