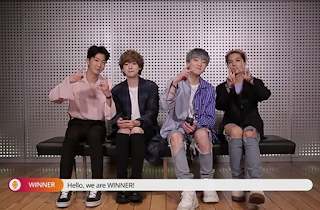 WINNER in POP IN SOUL Arirang TV –WINNER back and forth to TV and radio shows recently. Their comeback make us, Inner Circle can see our boys everyday and everywhere. And today, 23rd April 2016 they comes to Arirang TV for POPS in SEOUL tv show.

What they are talking about? Here are some of the interview on Arirang TV, check it out guys:

About your new song `Everyday`

Yoon : Convey the massage that we want to want to be with our fans everyday. As for the genre, it`s relaxing, easy listening song in chill trap style that all of you can enjoy easily.
Mino :  The highlight of Everyday is `Pizza, Pasta, so-so`.
Yoon : It`s Hoon hyung`s rapp part. The lyric `pizza, pasta, so-so` and the sound itself are very funny and interesting. So i`d say that the highlight.
Jinu : Everyone has said that part left the strongest impression when they the song for the first time.
Mino : There are dance challenge that`s trending these days, and we gave it different name. Various group in Korea are doing the dance, but we gave it different name.
Yoon : You shake your head and do a kick… It`ll be soon a vacation season, and people will go to swimming pools and beaches, we`ve named it `Shaking Water out of the Ears Dance`. You shake your ears to get the water out. (lol)
Mino : `Shaking Water out of the Ears Dance`!

Yoon : Because the lead trap is the hiphop song, i think it suits the rappers well. The way the rappers hit the verse determine the mood of the song. So I think the rappers best suits the concept.
Hoony : But I personally thing Yoon`s blue hair suits him.

Any other parts you covet?

Yoon : I personaly like Hoony`s rap part where he runs. (Then Yoon sing Hoony`s part)
Hoony : He sang it immediately, like jukebox.

About your new album `EVERYD4Y`

Yoon : After 4 years hiatus, we released our second studio album that consist of 12 tracks.  We wrote the musics and lyrics to all the tracks. We substituted the A in Day with 4. The 4 number has special meaning to us. And it`s become our signature number since last year. And as a double meaning we also used `4` as `for` that mean our Everyday is for our fans. The album title was created based on Mino`s idea.
Mino : You did`t need to tell them that. (While smiling lol)
Yoon : It containt various types of music including hiphop, rock, pop, dance, and ballad. There are so many different genres that you won`t find it borring even if you listen to it until the end and you will find it fun.

About the other tracks in Everyday

Hoony : We`ll sing the refrain in `Special Night` which i compossed. (Hoony sings it)
Yoon : It`s very exciting dance song in disco style.
Jinu :  I recommend MOVIE STAR.
Yoon : Could you sing a few lines? Movie Star is a great song.
I choose Mino`s solo track. It`s a song i want take from him. It`s sexy song.
Mino : Sing it!
Yoon : (Yoon singing) What comes next? (Ask to Mino)
Hoony : You should sang the next part Mino.
Yoon : I was confused.
Mino :  We changed the lyrics around three times. (Mino singing)
Yoon : It`ll make your heart race when you listen to it at night.
Mino : I want to introduce our second track ` AIR`. It`s very refreshing song. The air quality has gotten bad these days. So I think it`s a great song to listen to now.

The meaning of your song signature number `4`

Yoon :  When we initially released `Really Really` we wanted to emphasize that we are a 4-member group, and it was released on April 4. So that`s when we started emphasizing the number 4. `Really Really` gained much more love than we imagined, so number 4 become our lucky number. We wanted to share those good memories and energy with our fans and other listeners, so we emphasized number the 4.

Any memorable incidents during the album making process?

Yoon : Something memorable would be the reactions.
Hoony : The head of our agency we should work on a stage. And changes his mind to a mini album. But we hadn`t released a studio album for so long. And we really wanted to to give a studio album to our fans as a gift, so we worked on a lot of songs for a week. The decision to release a full-length album was made near the release date. We were very happy to finally present our first studio album to our fans in four years.

Did you feel any pressure because `Really Really` and `Love Me Love Me` became back-to-back hits?

Yoon : We were under pressure. We thought we should show growth so that a lot of people think it was worth showing us so much love. We were under a lot of pressure, thinking how to show more growth compared to `Really Really`. The decision we made was to present new genres and new sides of ourselves instead of doing similar music. And that`s why we created this album.

Yoon : We are back after four years with our second studio album, `Everyday`. Everyday we will make you happy, no matter how hard things get, so please check out our album, and we hope you find small joys in your life through our music! Thank you, as always.
This has been … Guess who`s back? We are WINNER.
WINNER : Thank you!

Here is the official video of the interview