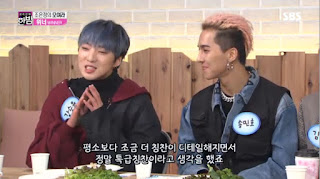 The day of spring rain, a crowd gathered at Sinchon for #WINNER, men we want to see every day

They became a trending group last yr w/ RR. They made their place in drama+variety too. W is back w/ EVERYDAY

I love that song! pic.twitter.com/dSPKaHKFSr

They were having a fansign. Despite the bad weather, the mood was warm. For fans who waited in the rain, they gave boyfriend-like fanservice

Y parodying CF
Even if u eat it every day, u wont get tired of it~ Everyday Korean beef pic.twitter.com/YoY21r8II7

WINNER has captured the public’s ears with simple melodies and honest lyrics and are now the winners of the music industry.

They received top-notch praise from Yang Hyunsuk as they filled their second full album with self-produced songs pic.twitter.com/pXW5OgwFZD

The most special praise we would receive from YHS used to be, “I think it’s ok” but this time he said, “I think EVERYDAY will really succeed. I think it’s good” He gave us more detailed compliments than usual so it was the best praise we got from him by far. pic.twitter.com/2i1pbBNPjC

MC: You were in SuperstarK2. You became so popular with Instinctively
Y: The popular of Instinctively was so much greater than the current popularity of EVERYDAY. I should have some shame😅

His husky voice captured the hearts of the public. pic.twitter.com/TIpEzOjekb

MC: Can u show a little bit?
Y: I looked like a real jerk when I said this line
M: I swore at u when I watched that scene

Y: It wasnt me! Its not mine! Its Kim Mincheols!
M: This punk! pic.twitter.com/d03KUm86ug

Seunghoon also gained attention in Kpop Star before debuting as WINNER. He made the judges fall for him with his improvised dancing and impressive rapping

Although he got eliminated at Top4, thru Kpop Star he was able to debut under YG pic.twitter.com/pIuhREv9R1

MC: u were the trainee who trained for the longest before debut
J: I was 20 when I became a trainee, which is older than most ppl so it was rly difficult. But I didnt kno what to do if I gave up this path. I couldnt give up. It felt like everything would end if I chose to end it pic.twitter.com/HU6WnAeWca

The 4 of them ran towards their dream of becoming singers and now this year is their 5th year as an idol group. They have confirmed their title as the winners of the music industry as they sell out every concert they announce pic.twitter.com/i6bD4w7msl

MC: Do u remember your first pay after debut?
M: I paid back my debts
J,Y,H: Me too
H: We were all debtors?!
M: None of us are from rich families
Y: Our families used to be of lower class than the average
H: Let’s not talk abt sad things… I’m still repaying- I’m working hard! pic.twitter.com/JFlDMpBdcx

Q. What other charms do u want to show to the public?
Y: It all comes down to music. Our making music that contains all we want to say is our charm
H: I really love the phrase “Trust and Listen WINNER” (you can always trust W’s music to be good) pic.twitter.com/vrNn3iGlwp

MC: The representative flower visual of YG. It turns out that his specialty is his face pic.twitter.com/xEVCEyIRzf