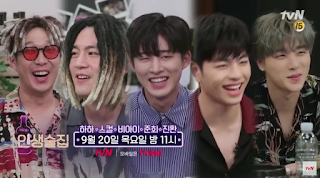 Awww Jinhwan is so cute Junhyun compliments his beautiful eyes and eye smile look at that Jinhwan smile shyly hehehehe this madhyung is really cute pic.twitter.com/PbuhVuCCmD

Btw Hanbin said it wasn’t from his experience. Lmao he is a motae solo remember everyone lol— he said the person he liked always didn’t like him back hahahha

hanbin: “im very grateful for the unexpected outcome for Love Scenario, this song was supposed to be in my solo album, but it turns out to be our 2018 return album’s title song, and it was a success.” pic.twitter.com/bEWsKBfj0T