W: How Blackpink Became Poised to Usurp BTS As the Global Face of K-Pop 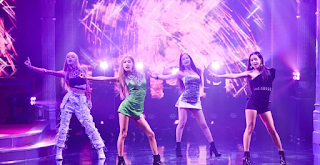 Within 30 minutes of its release, there was already an inkling that the Korean girl group Blackpink’s new video, “Kill This Love,” was going places. It had already reached 1 million likes faster than any video on Youtube, surpassing Ariana Grande’s “Thank U, Next,” which made it to 1 million at 33 minutes. Then, it blasted its way to 2 million likes—and then, it made it to 10 million views in four hours, 13 minutes, faster than any previous K-pop video. Faster, even, than “Idol,” the smash single by reigning K-pop royalty BTS. It’s the second-biggest Youtube video debut ever, and the biggest for a group—racking up nearly 50 million streams within 24 hours, trailing “Thank U, Next” by a scant 5 million views. It’s the biggest video of the year so far, K-pop or otherwise.

Though the aforementioned BTS has become synonymous with K-pop’s crossover international success, there’s ample reason to look instead to Blackpink. With “Kill This Love,” the group is poised to beat its own record—the video for “Ddu-Du Ddu-Du” is currently the most-viewed by any K-pop group on Youtube, but it also, upon its release, held the record for the most views of a K-pop video inside of 24 hours. Blackpink, like BTS, helped propel K-pop’s entrée into the Billboard charts, earning spots on the Hot 100, 200, Emerging Artists, and World Digital Song Sales charts. They guest-starred on Dua Lipa’s 2018 track “Kiss and Make Up.” The foursome also has a massive social following; Lisa, the group’s main dancer, has 16.7 million on her account alone.

“Kill This Love” is a military-inspired banger that sees the foursome—Jenny, Jisoo, Rosé, and Lisa—stomping around to a drumbeat and brassy trills, dancing in the middle of a giant-sized bear trap, and even staring down the sights of a bow with a flaming arrow. But the video’s success is less a testament to its particular artistry than it is to the following the group has amassed since they debuted, under the auspices of the K-pop mega-factory YG Entertainment, in 2016. Countless vloggers posted their real-time reactions to the video—a quick search from Youtube’s homepage presented a host of responses to the video before I was able even to find the video itself. One purports to have analyzed the distribution of screen time of the group’s members (it’s pretty equal, with Jennie at 26.1 percent of the video, Lisa at 25.3 percent, Jisoo at 24.7 percent, and Rosé at 23.9 percent).